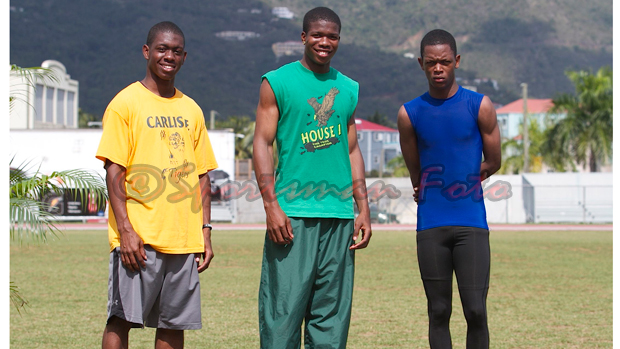 MARCH 28—A Men’s National Jr. Record and a Women’s Jr. Record equaling performance were among seven meet records falling on day one of the 41st  Elmore Stoutt High School Inter-hours Athletics Championships at the A. O. Shirley Recreation Grounds on Wednesday.

At day’s end, Carlisle—House 4—had amassed 422 points to lead the competition some 40 points ahead of defending champions Flemming—House 3—who had 382. The tight competition for second place heading into Thursday’s inal day of action, finds Lettsome—House 1 just 2½ points behind with 379.5. O’Neal who held a 20 points lead over Fleming coming in, has 374.

Alexander climbed from No. 8 to No. 3 on the territory's all time list, behind Dion Crabbe and Keita Cline's 10.25 and 10.44 respectively. In the process, Alexander also qualified for the July 10-15 IAAF World Jr. Championships in Barcelona, Spain. Stephens' 10.78 improved his personal best from last year's 10.87 and jumped from No. 10 to No. 6 on the all time list.

O’Neal House’s Trevia Gumbs equaled her Shot Put Jr. National Record from earlier in the season, when she eclipsed her own Intermediate Girls meet record of 9.83m set last year, with a heave of 11.59m (38’0½”).

Nelda Huggins of Lettsome House, snatched Darnetia Robinson’s 3-year old Intermediate Girls 100m record of 12.32 seconds when she turned back Carlisle House’s Jonel Lacey, 12.00-12.09—a personal best for Lacey--whose time puts her at No. 10 on the all time women's rankings.

Carlisle House’s Lakeisha “Mimi” Warner picked up her third meet record—adding to the 3000m and 1500m marks set during the pre events—when she ran to an unchallenged Intermediate Girls 400m victory in 57.12 seconds to slice .71 from last year’s best.

O’Neal House’s Tarique Moses became the second schoolboy this season to run under 50.00 and just the fifth overall in High School sports history, when he held off Alexander, 49.98-50.20—a personal best for Alexander—in the Sr. Boys 400m. Moses’ time surpassed the 50.99 meet record of his house mate Shaquoy Stephens—who cramped in his right leg as he stepped on the gas at the 300m mark.

Day 2 of the ESHS inter-house athletics championships continues at 1:00 p.m. on Thursday.