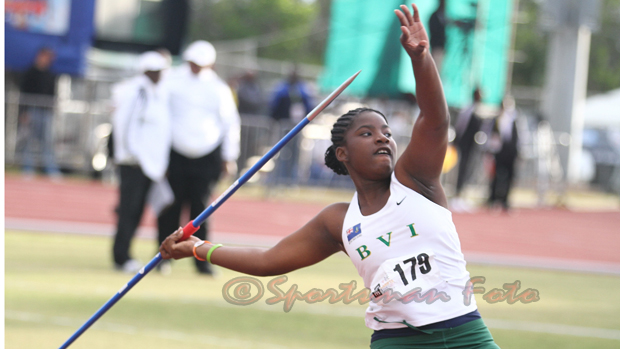 Carifta Games U17 Girls Javelin Throw gold medalist Tynelle Gumbs, her twin sister Trevia who nabbed Carifta silver in the Shot Put and Nelda Huggins who snatched U17 Girls 100m silver, will head the team for the three-day competition.

Tynelle heaved the newly implemented 500g spear 41.46m, while Trevia tossed the 3Kg Shot Put out to 13.57m during the Leeward Islands Jr. Championships. Huggins ran a wind assisted 11.77 at Carifta and has several 12.00 seconds marks to her credit as well as 24.57 in the 200m this season.

Among the boys, J’Maal Alexander who will join Lacey in Barcelona after sprinting 10.56 seconds during the ESHS Championships to qualify for the event, will also contest the 200m, in which he has improved his National Jr. Record to 21.62 seconds this season.

Kyron McMaster—a 2011 CAC Age Group Championships High Jump silver medalist—is coming off clearing a personal best of 1.86m (6’1¼”) for the first time to win the event at Leewards, is the lone male U18 competitor on the team.