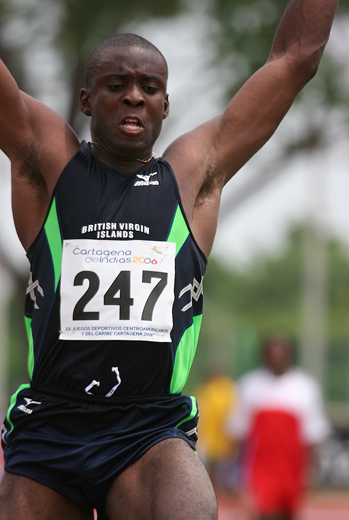 Two times Olympian Keita Cline, the territory's most successful Jr. Male athlete, will be the guest speaker. Here he competes in the 2006 CAC Games in Cartagena, Colombia

DECEMBER 22—The BVI Athletics Association will dole out Lifetime Achievement Awards to its 16 track and field athletes who have made BVI Olympic Games teams between 1984 and 2012, during the association’s fourth Athletes Awards Recognition Gala on Friday, Dec 28.

The BVI Athletics Association was the catalyst for the 1980 formation of the BVI Olympic Committee. In 1982, the BVIOC became an International Olympic Committee member, paving the way for the territory’s athletes to compete not only in the Olympic Games, but the Pan Am Games and the Central American and Caribbean Games as well.

Since then, Athletics and Sailing have sent 25 athletes to the Olympic Games with athletics having representatives at every Olympic Games since 1984. Sailing last participated in the Atlanta Olympic Games in 1996.

While the territory has not produced an Olympic Games medalist, Taheisa Harrigan-Scott—a two times Olympian—was a 100m women’s semifinalist during the 2008 Beijing Olympic Games.

The Athletics Association Olympians 1984-2012 are: