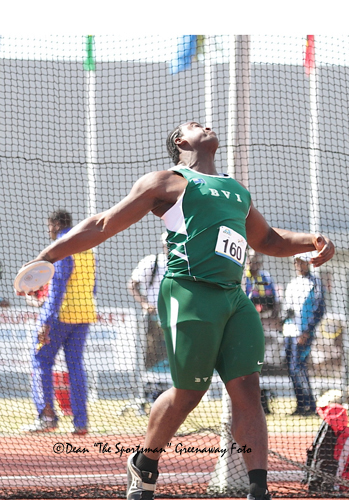 NASSAU, The Bahamas, Mar 30—Eldred Henry got the BVI’s first session of competition in the 42nd Carifta Games off with an U20 Boys Discus Throw bronze medal this morning, while three athletes advanced to tonight’s 400m U17 Girls and Boys 400m and U20 Boys 400m final.

Henry settled for best throw of 52.06m (170’10”) to finish behind two Jamaicans in his Carifta Games debut. He will contest the Shot Put later in the competition.

Tarika “Tinker Bell” Moses advanced to tonight’s U17 Girls 400m final, when she avenged a home loss to Guadeloupe’s Sareena Carti last year, by winning her heat in 55.63 seconds. The mark was .01 off her best when she advanced to last year’s Carifta final in Bermuda, but could not run because of an injury. Judine Lacey ran a non advancing 59.09 in heat two to finish fifth.

In the Boys equivalent, Kyron McMaster broke the 37-year old 400m National Scholastic Record held by association president Dean “The Sportsman” Greenaway, when he ran a personal best of 48.76 seconds to grab one of the two automatic spots in tonight’s final.

In lowering his best from 49.36, McMaster’s mark erased Greenaway’s 48.9 time from 1976 when the BVI debuted in the Carifta Games, also in the Bahamas.  Deshawn “Fast Man” Douglas ran a non advancing 54.18 to finish sixth in his heat.

Khari Herbert ran a personal best of 47.80 in the U20 Boys 400m and became the third automatic qualifier as one of the fastest losers through to tonight’s final. Herbert lowered last year’s best from 47.98. Shaquoy Stephens was fifth in his heat in 50.86.

Ashley Penn opened Day I of her Pentathlon by running 18.81 seconds in the 100m hurdles to collect 408 points for a fourth placed finish in her heat. She was sixth in the Shot Put with a toss of 8.59m (28’2¼”), worth 438 points. She will join Kala Penn later today in the U17 Girls Open Long Jump. She also has the High Jump to complete her first day of action.

The U17 and U20 Girls 100m semis will be contested this evening as well as the U20 Girls Shot Put.