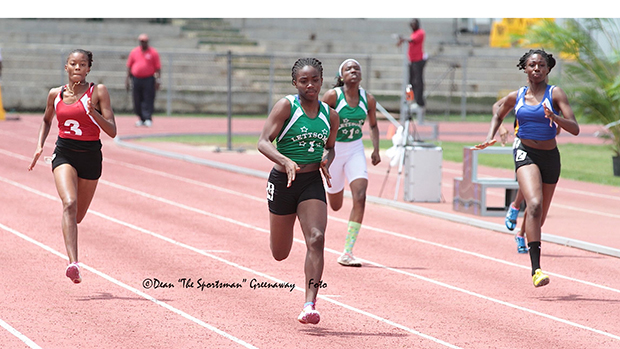 Huggins leapfrogged Hazel for the #5 spot on the territory’s All Time 100m list.

Following Huggins to the line were her Carifta Games 4x100m Relay teammates Tarika “Tinkerbell” Moses and L’Tisha “Lea” Fahie. Moses sliced her best from 12.33 to 12.28 in second while Fahie was third in 12.48.

The Jr. Girls 400m saw 12 year old Byonce DeFreitas becoming the fastest ever over the distance when she stopped the clock at 59.17 seconds to win the Jr. Girls race ahead of Zakharia Frett’s 59.58 as the O’Neal and Femming Houses, became the newest members of the sub 60 seconds club. They became the seventh and eight High School athletes—all U17, running under 59.60 seconds in one year—a record.

DeFreitas and Frett traded places in the 100m with Frett running a pestonal best of 12.96 while DeFreitas also got to the line in a personal best of 13.06.

Action resumes at 11 a.m. on Thursday.

See Day I Results at right.