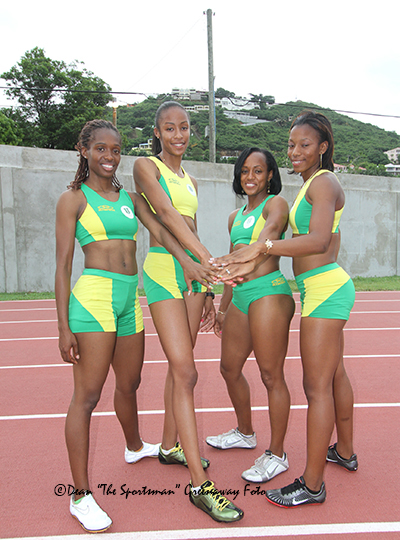 Karene King, left, Chantel Malone, Tahesia Harrigan-Scott and Ashley Kelly, will run at home for the 1st time since 2010 as professionals and look for 4x100m Relay glory

MAY 28—Athens 2004 Olympic Games champion Jeremy Wariner of the USA, will highlight the 400m in Saturday’s inaugural British Virgin Islands Twilight Invitational at the A. O. Shirley Recreation Grounds on Tortola.

Along with the pro meet, the Leeward Islands Jr. Invitational will also be staged, featuring the best U20 athletes in the sub region. With several Carifta Games medalists and finalists in action, this feature also makes the BVI Twilight Invitational totally different to all the NACAC Area permit meets in the Caribbean. In all, athletes from 17 NACAC countries will be in action.

With Wariner, a 2008 Beijing Olympic Games 400m silver medalist and a 2005 and 2007 IAAF World champion who is tuning up for Europe in the lineup of athletes from Trinidad and Tobago, Dominican Republic, Jamaica and the Netherlands Antilles, London 2012 Olympic Games champ Kirani James’s All Comers record of 46.85 seconds set as a 16 year old, will be wiped from the books.

Jamaica’s Patricia Hall and Anastacia Leroy along with St. Vincent and the Grenadines’ Kenike Alexander who have already run under 51.80 this year, the women’s 400m with hometown girls Chantel Malone and Ashley Kelly, and the Dominican Republic’s Raysa Sanchez, will be an exciting race.

An injury to the U.S. Virgin Islands’ Laverne Jones-Ferrette has put the first women’s 100m “Battle of the Virgin Islands female sprinters” on home soil with the BVI’s Tahesia Harrigan-Scott and Karene King on hold.

“I’m extremely disappointed that I can’t come to the Virgin Islands for this meet because of an injury I got in Shanghai,” Jones-Ferrette said. “Hopefully, I’ll be able to do it next year, but, I wish the organizers well with the meet.”

In returning to the British Virgin Islands to compete for the first time in 19-years, St. Kitts and Nevis’ sprint star and IAAF 2003 World 100m champion Kim Collins, will be tested by teammate Antoine Adams, Jamaica’s Dexter Lee and Trinidad and Tobago’s Aaron Armstrong.

Another highlight will be the Women’s 4x100m Relay.  In 2010, the BVI’s women’s team of Ashley Kelly, Harrigan-Scott, Chantel Malone and Karene King defeated St. Kitts. Now, they will face Canada, Puerto Rico, and the Dominican Republic, in a race that’s sure to better their 44.34 seconds All Comers Record. All of the teams will be trying to make World Championships qualifying marks.

The Leeward Islands Jr. Invitational will feature the 2012 & 2013 Carifta Games Javelin Throw champ, Dominica’s Shani Angol and the BVI’s Tynelle Gumbs, going head to head. Angol broke Gumbs’ record so it will be a battle.

Lakeisha “Mimi” Warner will headline the 800m against Guadeloupe’s Cheryl Farial, renewing their epic 2012 battle, where Warner 15, established the existing All Comers Record of 2:10.92.

Action kicks off at 4 p.m. with field events. A brief opening ceremony is set for 5:30 p.m. Admission is $10 for a one-time entry only. Tickets are on sale at: Botanic Service Station, Play to Win, JJJ Gift Shop in Lower Estate, Steve Augustine, Willis Todman and Rosalind Leonard.

No vendors will be allowed on the A. O. Shirley Recreation Grounds.