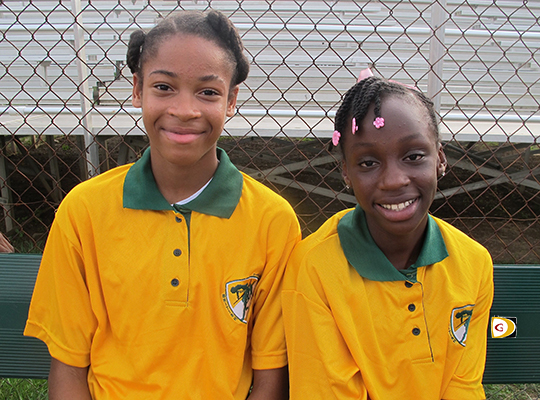 Beyonce DeFreitas, left and Xiomara "Gia" Malone competed in the CAC Age Group Championships 11-12 Division. DeFreitas won the individual division bronze medal as well as a 60m silver and Long Jump bronze. Malone was hurt in the Long Jump and was unable to run the 800m.

DeFrietas became the territory’s third athlete to have won a division medal in the championships that began in Curacao in 1985, joining Aliston “Al” Potter who won the 10-11 Boys Division silver in 1997 and Dione Blyden—the overall 10-11 Boys Division champion in 2003.

En route to amassing her 2,770 points, DeFreitas picked up a silver medal in the 60m dash missing Lewis’ time for the gold by .01 when she ran 8.25 seconds. She secured a bronze medal in the Long Jump after a personal best leap of 4.79m that tied eventual division winner Barbados’ Charissa Moore’ distance. Moore had a better second jump to earn the silver.

Injuries affected the 11-12 division’s team and the overall team score. DeFreitas’ counterpart Xiomara “Gia” Malone was unable to complete the 800m after a slight injury in the Long Jump—which preceded the 800m the final event—hurting the combined scores of the two females in the division. On the Boys’ side, Chaz Fahie was hurt during the 60m dash which kicked off the meet affecting his tenure in the competition. His counterpart J’Quaan Smith was 29th after scoring 2543 points. As a result of the injuries, there was no team score for the 11-12 Boys and Girls divisions.

Arianna Hayde scored 3524 points to place 19th as the duo who won the team bronze when the championships were hosted here in 2011, placed seventh overall with a cumulative score of 7145 points.

Jelani Norman tallied 4307 points for the 23rd position in the 13-14 Boys Division while Rakeel Jack was 31st with 3966. They finished 13th on the leader board with an 8273 score. Combined with their female counterparts they placed 12th overall in the division.

While Fahie’s injury prevented the 11-12s from competing in the mixed relay, Wong, Hayde, Jack and Norman were fifth in the 4x100m relay in 48.98 seconds.