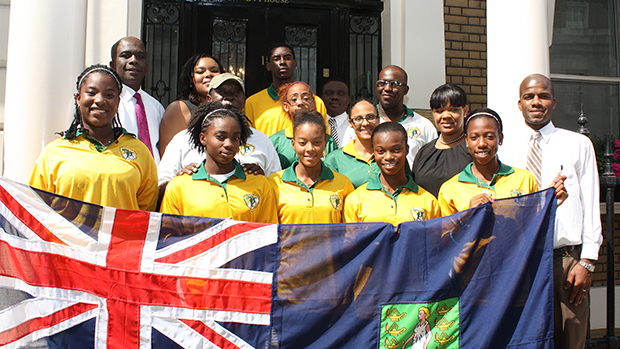 BVI London Office Director Kedrick Malone, 2nd left, and his staff, with the BVI's 8th IAAF World Youth Championships on their stop over on London. They will arrive in the territory on Thursday

JULY 17—The BVI Athletics Association in conjunction with the Department of Youth Affairs and Sports, and the Ministry of Education and Culture are organizing a motorcade and ceremony on Thursday afternoon, to welcome the territory’s IAAF World Youth Championships silver medal Medley Relay Team and delegation home from the competition held in Donetsk, Ukraine.

Lakeisha “Mimi” Warner on Saturday anchored the team into the automatic qualifying position in the final, by passing the Czech Republic runner who had earlier passed her, as the BVI finished behind Canada.

The BVI was the only team from the Caribbean in the relay final and the third of three North American, Central American and Caribbean (NACAC) area teams in the competition along with Canada and the USA.

The BVI, Jamaica and Barbados were the only English speaking Caribbean countries to have been among the 37 countries winning medals in the competition.

Following the meet and greet, a motorcade will take the delegation through Road Town, finishing at the Government’s Central Administration Complex, where a welcoming ceremony will be held.

The public is invited to attend this event.