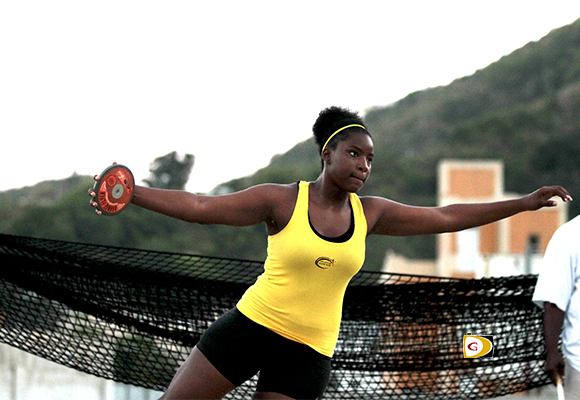 After becoming the first 30-30m combined thrower last year, Tynelle Gumbs unleasshed a throw of 40.89m (134’1¾”) in the Discus Throw on Friday night

The Gumbs’ sisters and Kyron McMaster 400m Intermediate Hurdles mark from last week, have lined up for a National Record Breakers award presented by Sol, which will be doled out during the 6th BVI Athletics Association Gala, on Dec 27. An athlete establishing an indoor or outdoor National Record that stands at season’s end qualifies for the award.

Elsewhere in the competition, Kala Penn won the U18 Girls Long Jump with a 5.01m leap and Fast Lane’s Shanakay Wheatley the U20 Girls division with 4.51m.

With 2013 Carifta Games U17 Girls 100m silver medalist Nelda Huggins of Top Notch Track Club opting to focus on the 200m where she had her best season opener of 25.03 seconds into a -0.6 mps wind, it left the U18 Girls 400m one entry short of five participants who ran 59.58 or faster last year.

Her teammate and soon to be 14-year old Zakharia “Zakie” Frett, dropped her personal best from 59.58 to 58.66 as the second athlete under 60 seconds in the race as .43 seconds separated Judine Lacey, L’Tisha “Lea” Fahie and Kelsha Fortune in the pecking order.

Fast Lane Track Club’s Kyron McMaster who began his season with a National Youth and National Scholastic 400m Intermediate Hurdles record mark last week, opener with his fastest 200m of 22.47 seconds into a -1.8 breeze, to take the U18 Boys event.

Beyonce DeFreitas, the 2013 CAC Age Group Championships 11-12 girls individual bronze medalist, ran a personal best of 25.69 seconds for second overall in winning her 200m heat into a 1.8 wind, in the Sprint Tech colors.

The BVIAA 4th Development meet is scheduled for 5:30 p.m. on Friday, Jan 24 at the A. O. Shirley Recreation Grounds.

Events are for Male and Females