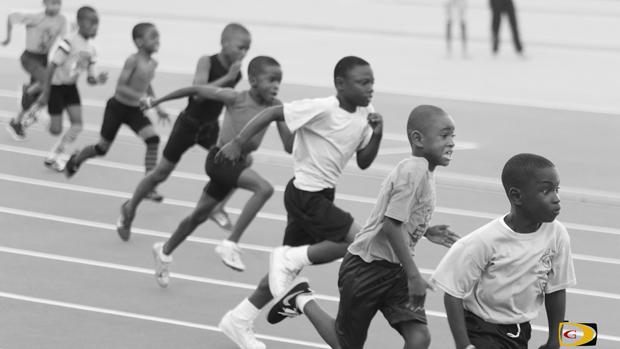 In between a pre meet shower on Friday and a threat of rain and Saturday's end the BVI Athletics Association National Youth Championships-which also celebrated the 21st IAAF World Athletics Day-Ariyah Smith led the territory's top U15 athletes and visiting athletes from St. Croix, with four victories.

Khybah Dawson and A'Sia McMaster pulled of trebles and nine athletes were double winners in the competition that had most of the athletes opting to represent their clubs, with St. Georges and Joyce Samuel the two schools fielding teams.

Khybah Dawson, after a second place finish in the U13 Boys 100m behind Kyron Walwyn's 13.17 seconds with 13.34, went on to post his treble with a Long Jump personal best of 4.98m, then tied Sha'el Lavacia's 1.45m clearance in the High Jump, before wrapping up his winnings with a 27.37 seconds 200m triumph.

Tyrone won the U11 Boys Baseball Throw with a 48.60m effort along with a 1.25m leap to secure the High Jump. He was third behind Kaleem Lettsome in the 80m, which Lettsome won in 11.46 secnds to his 11.51. Lettsome completed his double with a 21.41 seconds run in the 150m, with Tyrone placing second in 21.64. Lettsome-who has never lost a sprint final over the last four years-was second in the Long Jump after cutting the sand at 3.42m. Tyrone had a 3.33m jump in fourth.

T'Yanna who also plays baseball along with her brother, won the U15 Girls Baseball Throw with a 44.44m effort and took the Shot Put with a 5.46m heave. She was third in the Long Jump after a 4.36m leap.