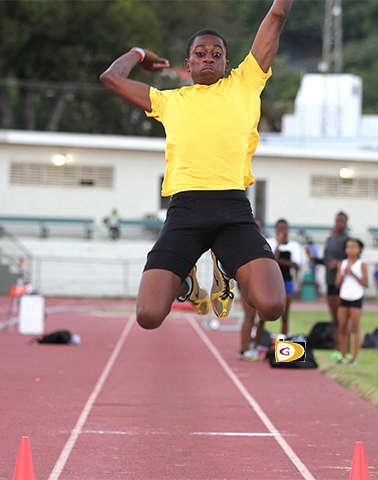 Versatile Akeem Bradshaw had the best Triple Jump series for a home based athlete producing three jumps over 14.00m with a best measuring 14.29m then ran 2:05.41 in the 800m

FEBRUARY 23—Fast Lane Track Club’s Shaquoy Stephens dropped the fastest time ever recorded by a home based athlete in his second century of the season and Top Notch Track Club’s Akeem Bradshaw had the best home based Triple Jump series ever, among highlights of Saturday evening’s 9th BVI Athletics Association Development Series meet.

While what was billed as the fastest man on island showdown with Stephens facing Top Notch Track Club’s duo of Mark Kendal and J’Maal Alexander who ran 10.83 and 10.85 respectively in their last outing, didn’t materialize—he strutted his stuff on his own.

Bradshaw soared to the best series of Triple Jumps ever for a BVI athlete behind National Record holder Keita Cline, leaping over 14.00m three times and settling for a career best of 14.29m. His series also included jumps of 14.28m and 14.15m in the U18 Boys division.

Bradshaw then went on to produce his fastest time of 2 minutes 05.41 seconds over 800m.

Fast Lane Track Club’s Kryon McMaster ran a legal 22.19 seconds in the 200m for his best mark ever, then followed up with a jog of 51.62 in the 400m. He ran 48.77 during the Scarlet and White Indoor Invitational in Boston last weekend.

Kadeon Potter—5th in last year’s Carifta Games U17 Boys Shot Put—threw over 14m in for the first time in his career, with a personal best heave of 14.13m sporting the Fast Lane blue and grey.

Raw Skillz’s Shaniyah Caul had the day’s notable performance. Caul who won’t be 15 until December, ran her first 400m in 2-years, recording a personal best of 1 minute, 00.91 seconds. She also recorded a personal best of 26.66 in the 200m.

With the LIME National Jr. Championships on the horizon on March 21-22, the 10th Development Series meet is scheduled for 5:30 p.m. on Friday, March 1.