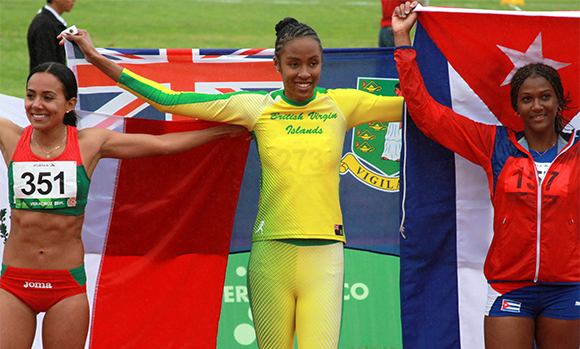 Chantel Malone stands at the top of the podium, flanked by a Cuban and a Mexican after claiming Long Jump gold. PHOTO CREDIT: Cleave M. Farrington

NOVEMBER 26—It was yet another golden moment for the territory. Chantel Malone extended the British Virgin Islands’ Central American and Caribbean Games’ gold medal streak to four straight when she landed at the top of the Long Jump pile in Xalapa, Mexico, during the 22nd edition of the event on Tuesday afternoon. She also became the first in a field event after three medals in the short sprint.

Malone who narrowly missed a medal and settled for fourth in the Commonwealth Games in Glasgow, Scotland over the summer, seized the lead for good from Cuba’s Irisdaymi Herrera in the third round with the winning leap of 6.46m as the Cuban did not better her opening 6.32m mark until her last attempt when she cut the sand at 6.36m to claim silver.

“I am more than excited to be the CAC Games champion, because for the last couple of seasons and major championships for my country, I’ve let the opportunity slip through my hands,” Malone reflected. “In the beginning of the jumps, I almost thought it would happen again, but, I quickly reminded myself that it only takes one jump to win. So I just went out there and gave it what I had.”

Malone said this was her turn and no one was going to take it away. “It’s time for the return of Chantel,” said the BVI national record holder in the Long, Triple, High Jumps and 400m. “This is only one task I have accomplished. I will continue to work hard so I can reach other goals I have in mind.”

On her way to winning, Malone noted that the weather was horrible and her early marks of 6.19 and 6.11 are measurements she exceeds with only eight steps in training. “I didn’t care that it was raining,” she said. “That wasn’t an excuse.”

Meanwhile, Tahesia Harrigan-Scott who was seeking to become just the second 3-peat 100m women’s champion, finished a disappointing eight in the final after hip troubles. She had a time of 11.93 seconds. She advanced to the final by placing third in her heat on Monday in 11.60 seconds.