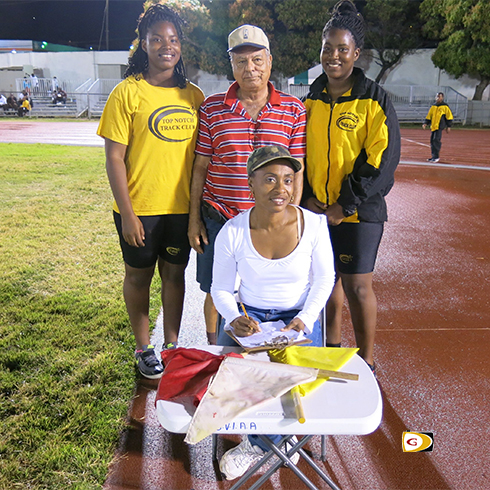 Former BVIAA President Johnny Hassan, is flanked by Shot Putters and twin sisters Trevia and Tynelle Gumbs, the first two females to throw over 12.00m in the same competition and official Roslyn Gilbert, who sits in the chair with the table Hassan donated.

FEBRUARY 25—Officials recording measurements in field events in BVI Athletics Association and other track meets in the territory, will no longer have to stand, thanks to a donation from a former president.

Hassan who was BVI Athletics Association president between 1974 and 1976 has made other equipment donations to the association. Every time an athlete open a water cooler to get a beverage at BVIAA competitions, whey interact with Hassan’s donation.

Last week the BVI Athletics Association held the Johnny Hassan Relays. Hassan presented the monetary prizes he donated to representatives from Fire and Rescue, Top Notch, Sprint Tech and Raw Skillz Track Clubs who had the top teams in the relays in his honor.