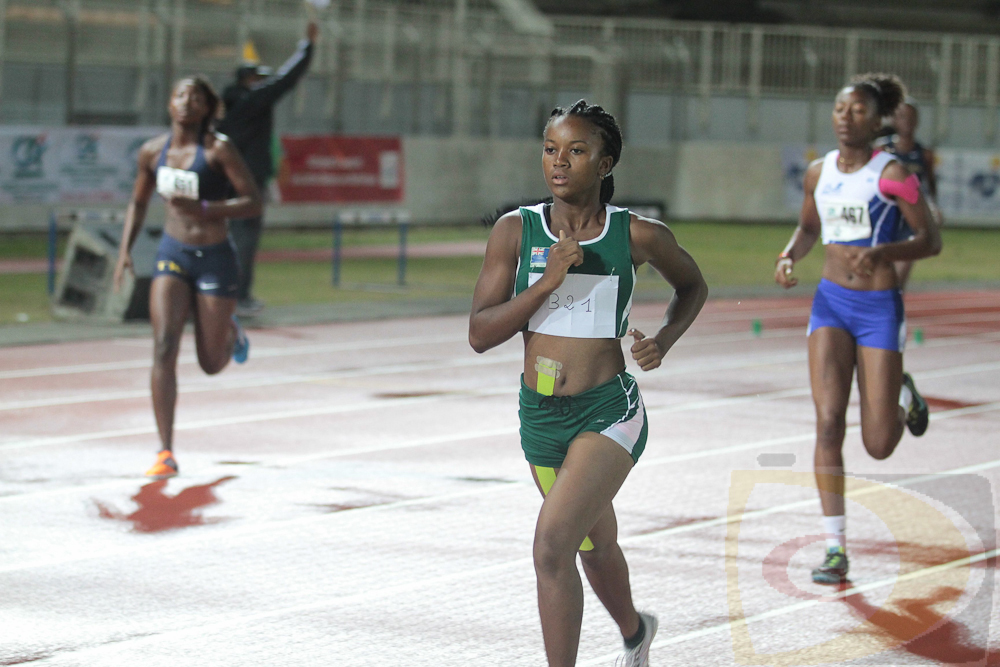 Arianna Hayde takes the break in the Heptathlon 800m en route to winning her heat in 2 minutes 40.39, good for 4th overall en route to establishing a National Youth/Jr. Record of 3769 points

Three National Youth and National Jr. Records—in the U18 Boys 400m Hurdles, U18 Girls 4x100m Relay and the Heptathlon—and an IAAF World Jr. Championships qualifier came on Sunday’s second day of the 3-day competition that wraps up today, as the territory’s athletes seek to improve on their rankings with competition in seven events.

Tynelle Huggins gave the BVI its second medal on during the morning session, when she earned an U20 Girls Discus Throw bronze with a heave of 40.45m—the second best mark of her career.

On Sunday afternoon, Kyron McMaster put the disappointment of Saturday night’s sixth place finish in the 400m final behind to snatch bronze in a National Jr. Record time of 52.85 seconds in the U18 Boys 400m Intermediate Hurdles. It was only his third time running the event after he placed third in his heat in 56.08 to reach the final.

McMaster became the second IAAF World Jr. Championship qualifier in the competition joining Huggins who on Saturday night, added the 100m to her 200m qualifier from early in the season.

In the BVI’s final event of Sunday evening, the quartet of Zacharia “Zakie” Frett, Kala Penn, L’Tisha “Lea” Fahie and Huggins, won the territory’s fourth bronze when they finished third behind Jamaica and the Bahamas in the U18 Girls 4x100m Relay, with a National Jr. Record time of 46.30 seconds. The mark eclipsed the 46.62 ran at the Leeward Islands Invitational in 2013.

Penn was seventh in the Long Jump after cutting the sand at 5.60m, before taking up relay duties on the second leg.

Huggins—who became the BVI’s most prolific Carifta Games medalist with seven, breaking a tie with both Keita Cline and Chantel Malone who bagged six each—won her 200m heat in 23.6 seconds hand time on Sunday evening, to qualify for her third successive final. She’s seeking her first medal in this event.

Before taking up 4x100m Relay duties on the second leg, Kala Penn came seventh in the Long Jump after cutting the sand at 5.60m aided by a +2.6 mps breeze, while Ashley Penn was 18th after a 4.95m effort. Kala will see Triple Jump action today.

Arianna Hayde continued the stellar performances of debutants when she finished seventh overall in the Heptathlon with a National Youth and National Jr. Record of 3,769 points, which came after winning her 800m heat in 2 minutes 40.39 seconds—good for 4th oveall. Only Kanishque “Kadi” Todman’s 4188 points from last year is better.

Akeem Bradshaw who debuted in the U18 Boys Triple Jump and took down Keita Cline’s 1991 National Youth mark of 14.87m with a leap of 14.90m to place fifth overall on Saturday, will contest to Long Jump.

Deya Erickson will contest the U18 Girls 100m Hurdles