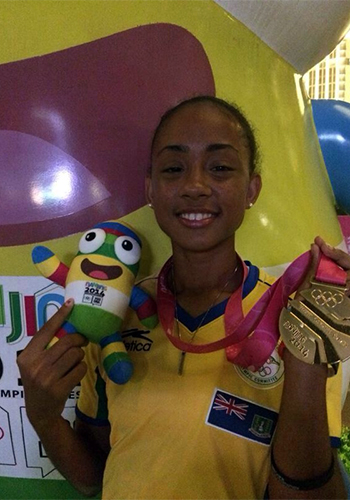 AUGUST 26--With a little help from her new found friends from around the world—several of who didn’t speak her language—the BVI’s Lakeisha “Mimi” Warner won a Youth Olympic Games Mixed 8 x100m Relay gold medal on Tuesday, at the close of the track and field segment of the Games in Nanjing, China.

Warner, 17, meeting her teammates at the line for the first time to make up Team #34—four women and four men including a Shot Putter—was comprised of athletes from Romania, Russia, Venezuela, Australia, Comoros, Germany and Thailand. They had a winning time of 1 minute 40.20 seconds.

Warner, who ran seventh receiving the baton from Russia’s Tatiana Blagoveshehenskaia passed off to Romania’s Ioana Gheorghe, combined for a  winning time of 1 minute 40.20 seconds. They had the second best time of 1:41.79 from the prelims entering the final.

“It feels awesome even though the 800m didn't go as well,” said Warner who won the C 800m final in 2 minutes 16.71 seconds. “It was a very interesting experience and if I could do it again I definitely would. It was nice to learn about different cultures and meeting new people from around the world. It's an experience of a lifetime.”

Warner was on the territory’s Medley Relay team that won IAAF World Youth Championships silver in 2013.

The Mixed Relay gave both track athletes from various distances up to 3000m a chance to mix it up with their field counterparts in such events as the Pole Vault, Javelin Throw and Hammer Throw.

Huggins, 17, was sixth in the 100m A final on Saturday night. After a false start by pre race favorite Nikola Swoboda of Poland who established a National Jr. Record of 11.30 seconds in the prelims opened the door for everyone else, Huggins was unable to capitalize. She had an average start but lacked her usual finish and was timed in 11.87 seconds in sixth. She ran 11.81 to win her heat on Thursday.

McMaster—in just the sixth 400m Intermediate Hurdles race of his career—was running well and in the top four approaching the seventh hurdle during the prelims when he lost his concentration and pushed the hurdle down without clearing it. He was subsequently disqualified. In the B final, he was charged with a false start.

Erickson ran the 100m Hurdles in 14.76 seconds but was unable to contest the C final because of an injury.

Bradshaw placed fifth in the B Triple Jump final with a leap of 13.90. He had two fouls and ended the meet with a 13.60m leap. Bradshaw was 13th overall during Friday’s preliminary competition. His opening bound of 14.33m turned out to be the best effort of his series that also included marks of 14.07 and 14.22m.