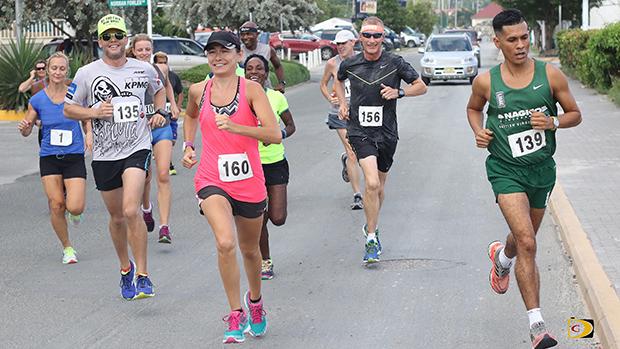 After coming within three seconds of Renold Brown's 13-year old Virgin Gorda College Classic Series record in his last outing, Reuben Stoby wanted to take down the mark on Saturday morning, but thought long and hard about his afternoon battle with Julius Farley for the Ceres Juices 10K Series overall crown.

With both of them tied on points and the winner earning the crown, Stoby decided not to go to Virgin Gorda.

"The series was up for grabs and as much as a record has a nice ring to it, I've come so close and I'm confident I could break it, but I didn't want to take any chances because this race was very important," Stoby stated, after running 38 minutes and 55 seconds to Farley's 39:20. "I came specifically to win today and not to run fast. I actually ended up working harder than I expected to. I had some stitches and Julius always run a consistent pace, but I'm happy that I  was able to find something in the end just to pull through."

Farley said he knew he had to set his own pace and knew it would be a good race with Stoby, who wouldn't give up.

"I tried to hold him off as much as I could but I had stitches from the start and throughout the race," Farley said. "Not taking anything away from him, he ran a good race. I tried my best but in the end, he got the better of me. I couldn't ease up."

Maria Mays, third overall in 44:22 was the top woman, won three of the five races. "I'm really happy but was a little worried that I might not get it (overall title) but I did it and it was brilliant," she said. "I couldn't keep up with Julius and Reuben today, but, it was a really nice race."

Race Director Kay Reddy said the series was one of the best. "This is an absolutely superb 10K," Reddy said. "The runners come out and Ceres is one of our best sponsors. Not only do they come out with lots of produce and lots of prizes, but the sponsors themselves come out for every race, they get involved at the water stops, they make sure everybody is happy and we get to taste new products. All in all, it's a great event."