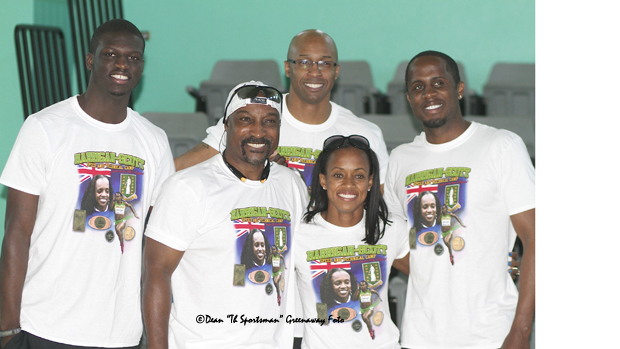 They all advised the 76 athletes who attended the camp to ‘listen and believe in yourself.’

When the camp opened on Saturday morning, Harrigan-Scott told the athletes it was organized for their benefit and she hope to eventually see them emerging to fill spots on future British Virgin Islands Sr. teams.

“When you are a professional athlete, you have to make certain sacrifices and you have to be ready to make those sacrifices,” James said.

Athens 2004 Olympic Games Long Jump champ and 4 times IAAF World champ Dwight Phillips shared his insight on overcoming adversity and going from worst to first. “The decisions you make today, will determine your path to your future,” he said. “So, you need to make the right decisions. Listen to your coaches, your parents and stop listening to all this rap music. The power of thinking positive is very important.”

Glance told the young charges no matter what they got through, they have to stay the course and emphasized the importance of listening. He said things are not always going to be go train, go to bed, eat, sleep. “There are going to be people who are going to interfere in your life but you have to balance your life. If you want to be successful, you have to have all the key ingredients to be successful,” he said. “You have to be willing to say no sometimes. You have to be willing to get your rest. You have to understand that you have to protect these things that makes you who you are. The better you are, the best you become, the more demand others will have on your time.”

Glance said it’s not easy, but, if they are willing to make sacrifices, be dedicated, be committed, and listen, they can go a long way. The Olympic champion coach left the athletes with a message which he had them repeat several times. “If it is to be,” he said. “It is up to me.”

Harrigan-Scott, the territory’s 100/200m National Record holder was delighted with how things went. “The message was great today—you have to believe in yourself—no one can want it for you,” she said. “This clinic was to put them in an environment where they feel no matter what the situation is, they can beat all odds. We wanted them to understand, if they train hard, they are dedicated to something, if they are committed to the sport, then, no matter what, they’re going to excel in the sport regardless. That’s what I want them to carry on.”

Harrigan-Scott said in track and in life, you’re going to have bad days. She said if they could overcome them with dedication and push their way forward, they’ll get better and better as they go along.

National Javelin Throw record holder Tynelle Gumbs, said it was a good experience. “They all gave valuable advice which I know I needed because many of those things they mentioned I don’t think I did before,” she said. “So now, its just to apply them in practice and in training. I know they’ll obviously benefitted me because they benefitted Kirani and he’s now a World and Olympic champion. His advise must be working if he’s up at that level.”

Sprinter Nelda Huggins said she learnt about eating properly, how she’ll be approached in anti doping and how to work through injuries. “They said a lot of good things about balancing school and track,” she said. “No matter if you are down, you must keep you head up.”

Keshema Flemming a regular competitor from St. Thomas’ Eudora Kean High School said it was inspirational. “I’ve learnt a lot from what they told us and now I’ll just try my best,” the 400m runner said. “Kirani talked about balancing school and track at the same time and you have to believe in yourself or else you are not going to do good in anything.”