FEBRUARY 27—The curtains will come down on the 2013 Gatorade Development Series on Friday night, with the Rey O’Neal Fast Times meet, starting at 5:30 p.m. 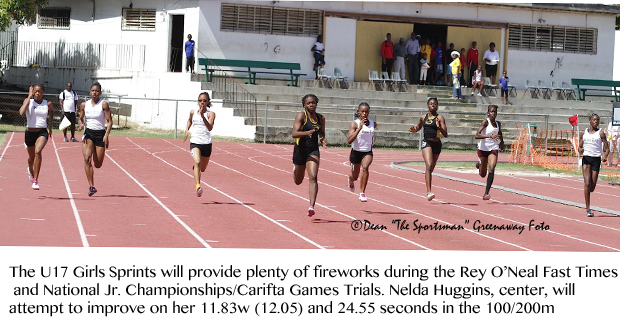 Friday’s competition—the fifth in the series--is the final tune up for the March 8-9 National Jr. Championships, which also serves as the Carifta Games Trials.

Over the course of the series that began on Jan 12, there have been numerous personal best established and athletes have made qualifying standards for the IAAF World Youth Championships, the Pan Am Jr. Championships and the Carifta Games.

Events on the program includes:

Online registration is in progress through midnight on Monday, March 4, for the National Jr. Championships/Carifta Games Trials on Friday and Saturday, March 8-9.

The semifinals will begin at 5:30 p.m. on Friday, March 8 and includes the 100m semis and finals in both U17 and U20 divisions. The 400m semis as well as the Javelin Throw, High Jump and Triple Jumps, 1500m finals and the first two events of the Pentathlon will also be contested.