O’Neal was on hand to witness the performance as Warner, who will be 16 later this year, opened her season on Jan 12, with a run of 2 minutes 17.10 seconds in the 800m—her pet event. Along the way, she went on to make the IAAF World Youth Championships qualifying standards in the 100, 200 and 400m events--before returning to her roots on Friday night, with the second fastest time of her career, 2:11.81. In the proc 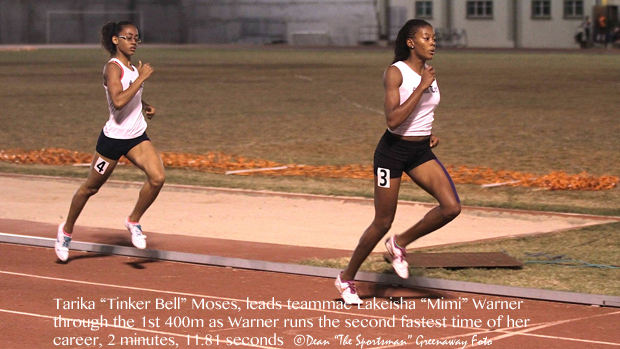 ess, she became the territory’s first athlete to qualify for World Youth in four different events.

In another development, several U17 Girls quarter milers who have been hovering around 60-61 seconds, made a major break through. Sprint Tech’s Judine Lacey overhauled Top Notch Track Club’s Kelsha Fortune in the last 20 meters, leading another three athletes to personal bests, finally under the 60 seconds barrier.

Up and coming U13 Girls and Sprint Tech athlete Beyonce DeFreitas, days from her 12th birthday—with a range from 100-800m like Warner—pulled off a notable sprint double, taking the century in 13.20 and the duce in 26.57, both personal bests.

Jonel Lacey, also of Sprint Tech, bested U20 Girls teammate Taylor Hill for the first time this season in both sprints, taking the 100m in 12.36 seconds—.02 faster than Hill. Lacey also got the nod in the 200m as both ran 25.46.

On the field, Top Notch’s Trevia Gumbs—last year’s U17 Girls Carifta Games silver medalist—found her rhythm in the U20 Girls Shot Put, tossing the 4K ball out to a personal best heave of 11.98m (39’3¾”) to secure return trip to the championships.

On Friday and Saturday will be the Carifta Games Trials, which also serves as the National Jr. Championships. Competition begins at 5:30 p.m. on Friday, March 8 and includes the 100m semis and finals in both U17 and U20 divisions. The 400m semis as well as the Javelin Throw, High Jump and Triple Jumps, 1500m finals and the first two events of the Pentathlon will also be contested.