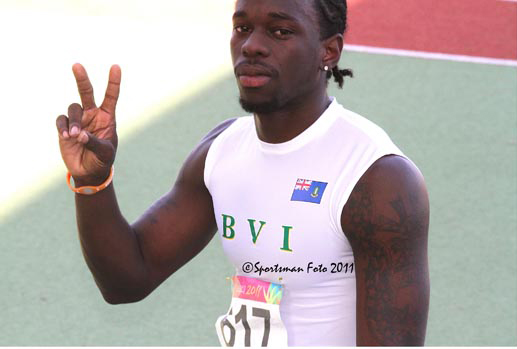 MAY 5—Bethune-Cookman Wildcats Jr. Keron Stoute, set himself up nicely for the territory’s inaugural Collegiate Performer of the Year Award to be doled out later this year, after securing second place finishes in the MEAC Outdoor Track and Field Championships Decathlon and Open High Jumps, during the competition held at North Carolina A&T in Greensboro, North Carolina.

In the middle of the Decathlon, Stoute cleared the bar at 2.06m in the High Jump, while closing Day 1 of the 10-event discipline at the top of the pile with 3618 points. “It was cold, raining and the struggle out there was real,” Stoute explained via facebook after the first day.

He scored 2490 on Day 2 for his personal best 6108 points falling 40 points shy of his teammate Martin Embry III’s 6148 to successfully defended the title he won in 2012. Stoute, the reigning MEAC Indoor champ, contributed 16 of the Wildcats 64 points helping them to a third place finish.

“It was a good effort, but, not the performance that I was capable of and was looking forward too,” Stoute pointed out. “The last two Decathlons have been roller coasters. Some events went extremely well while other were severely lacking. What I’ve learnt is that I need to be more consistent in my events that I excel in. To score 7000 points, I need to work on my stamina and strengthen my weaker events like the Discus Throw, Pole Vault, Shot Put and Hurdles.”

When asked what second day score he’d look for in those events, Stoute said he has been higher, faster and thrown further, but he’s not consistent. “I am fairly new to the multis with only three under my belt and every time my score improves,” he noted. “So once I get everything together I see myself well in the 7000s.”

This weekend, Portland State Vikings Sr. Dominique Maloney will compete in the Big Sky Conference Outdoor Championships on home turf. On Saturday, she got her final tune up at the Pacific Twilight, where she won the 200m and was second in the 100m with times of 24.45 seconds which equaled her personal best and 12.01.

She was second in the 400m during the Indoor Championships.