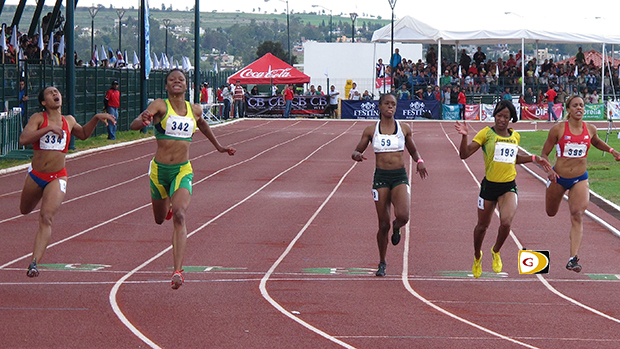 MORELIA, Mexico, JULY 8—British Virgin Islands athletes wrapped up their tenure in the 24th Central American and Caribbean Track and Field Championships in Morelia, Mexico on Sunday, with Chantel Malone and Kerene King placing fourth and fifth respectively in the Long Jump and 200m events.

Their performances came after Kanishque “Kadi” Todman opened the competition by improving her Heptathlon National Record.

After fouling her first two attempts, Malone recorded a leap of 6.35m in the Long Jump to book her place in the final and moved into second place with the effort. She matched the same mark in the final, then on the last jump of the competition, the medial’s were decided.

Malone slipped and was unable to get off her final jump of the competition and settled for fourth place, then explained that she over rotated.

“I was a good meet, just not where I wanted to be because during the warm up, I tweaked my hamstring and was working through the shocking feeling,” she explained. “I’m not blaming it on that because I was still able to go out and do what I had to do, but unfortunately, it wasn’t as good as I wanted it to be.”

Malone will now put the finishing touches on preparing for the August 10-18 IAAF World Championships in Moscow, Russia. She said her performance doesn’t dictate what happens for the whole season. She’s coming off successive 6.57m jumps in Canada and Jamaica.

“It doesn’t mean I’m not where I want to be,” she said. “I’ve had jumps that were scratches beyond World Championships A standard  (6.70m) so I don’t have any doubt in my mind that I’m ready. I just have to get it right on that day.”

King advanced to her first CAC Championships final by running 23.64 seconds in her 200m heat. She then placed fifth in the final in 23.56.

Ashley Kelly had a non-advancing time of 24.30 seconds in her heat.

“I’m thankful to God because I’ve been at CAC several times and I’ve never made a CAC final before. I’ve put in the hard work the trust, the belief, the confidence, made it here and I’m in the top five.

Before the final, King said she experienced pain in her hips and hamstrings but made the decision to run. “It was my first time and I had nothing to lose and everything to gain,” she explained. “When I saw lane three, I was a bit skeptical because I run better from the outside lanes, but I said to myself, it’s all 200m.”

Her coach Ronnye Harrison said he though she did a good job in the entire competition.

“We have a lot of work to do before she goes to Worlds, mostly in the area of therapy and acceleration, but that’s her achilles heal we constantly have to be working on,” he explained. “We have some time to work on some things now and give her a little bit of rest and I think she’ll be fine. We now know that she can run 23 mid on any given day,” noted Harrison who has brought her from 25.34 seconds to 23.24. “And, that’s really good. I think with the excitement level of Worlds, we see a personal best from her for sure.”

High Jumper Keron Stoute had a leap of 1.95m in his competition.