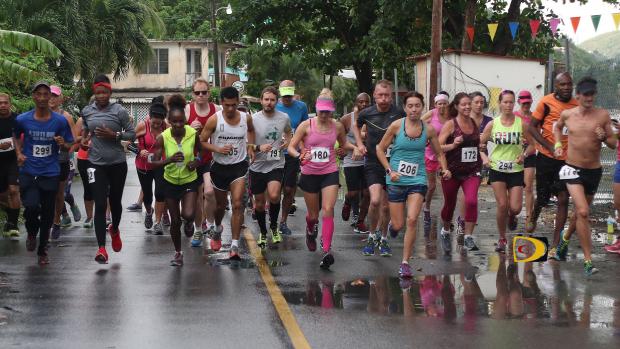 Ahead of the 21st College Classic Series opener on Sept 17, fall road racing on Tortola resumed with Saturday's Ceres Juices 10K Series in Carrot Bay, where Reuben Stoby and Maria Mays were the respective male and female winners.

Stoby covered the rain affected course from Carrot Bay to Smugglers Cove and return in 42 minutes and 26 seconds, after overhauling Guy Williamson who finished in 42.29.

"I didn't let up on my training during the summer, I continued to do a lot of long runs in the morning so I was feeling very good, but once I notice the wet conditions, I didn't really worry about a fast time and just tried to take the win," Stoby explained. "Guy was leading throughout the race. I tried to make some surges but he wouldn't let me pass. I let him continue and was able to pass him on Long Bay Hill. I wanted to finish a little faster-I didn't-so I was trying to finish in good form."

Williamson went out quicker than he usually does and said it was because he took a break from running over the summer.

"But, I really enjoyed the course," he said. "Its the first race I did when I arrived three years ago and I remember Reuben kindly letting me win that one," he recalled. "It's a beautiful course and we had nice conditions for a nice cool race compared to the weather during the rest of the week and it was good to give Reuben a bit of a challenge at the end."

Women's Division winner Maria Mays didn't have a particular goal in mind for her race. "I nearly stayed in bed because of the weather so I just came out and thought it would be nice to run," she said. "We just set off and Kat (Katrina Crumpler) and Melissa (Brunner) were with me, which is always nice to have company then the competitive streak kicked in and I thought I could go so I did."

The course which included two major climbs in and out of Long Bay was hard though, Mays said. "Zebalon (McLean) and Kat were right behind me and I thought they were going to catch me," she reflected. "I didn't ease off until the last corner and I knew they weren't immediately behind me, but, it was a lovely race."

The next race is scheduled for Beef Island on Oct 8.