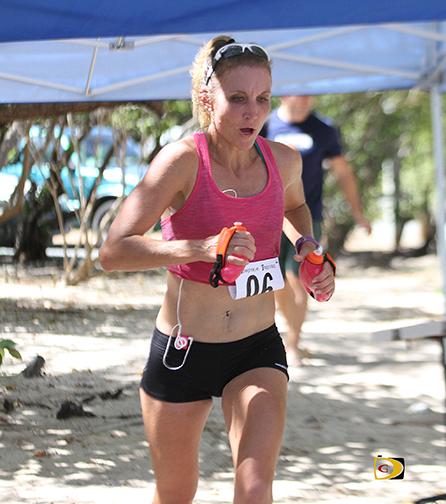 When her friend Jen Shelton got injured while skiing in Italy, Bree Ray of Las Vegas, Nevada, had one simple goal in Saturday's 3rd Tortola Torture.

"I know that Jen was initially invited here to try and break the women's course record so when she got hurt, I decided that is what I was going to try and do for her," Ray explained. "I know the past record was 5:30 something so my goal was to be faster than that."

Ray not only demolished the Women's Division course record, but finished 36 minutes ahead of Virgin Gorda's Vincent Fournier, her closest male pursuer, to dominate the event and in the process, became the second person completing the 33.4 miles challenging course in under five hours.

Ray covered the course from Road Town, around Steel Point, up Windy Hill to Sage Mountain, down to Brewers Bay, over the Ridge Road to Baslam Ghut, then around Little Mountain and with a finish at Loose Mongoose on Beef Island, in 4 hours, 58.11 seconds. The American finished just behind the Three de Hard Way's relay team of Julius Farley, Reuben Stoby and Rosmond Johnson's 4:58.06, a new relay record.

"It's probably one of the best adventures I've ever had," Ray said. "The island is absolutely beautiful, so it was hard to remember you were racing because I just kept getting caught up in all the views, but it was a fantastic experience overall,"

"I tried not to look at how many miles in I was, but to keep it nice and controlled and to enjoy every minute of the experience," said Ray who has a 2 hours 45 minutes and 10 seconds Marathon best. "I've done some kind of adventure race like this but his is my first adventure race like this. I've done a couple Ultra Marathons. I did my first 50-miler in January, but before that it was mostly Marathons."

She added: "I missed the Olympic Trials qualifier which was very sad, but I'm gunning for it this time around. Everything you do that you push yourself through, makes you stronger, both in running and in life, so there's always something to learn."

Fournier said he was trying to improve on last year's 5 hours 24 minutes and 03 seconds time.

"It didn't happen. It was pure torture. I tried to do the first bit faster since it's flat and I felt like it was hotter than last year and I couldn't keep up with the speed till the end," he explained. "I was 10 minutes slower and a woman beat me by 36 minutes and for the ego, that's a good one. A lot of respect to her because she's really fast. She was telling me she runs Marathons in 2:45. At the beginning I was trying to follow her, but when she told me that I was like, maybe, I should back off a little bit else I'll get burnt."

Klein said the race was awesome. "As torturous as it is, it's more beautiful than torturous and today was a nice day, relatively cool, perfect day," he noted. "I just wanted to get under six hours. The two year's I've done the race I've had problems. First year I went off the course. Second year I had stomach problems. Today, no problems."

For Mays who ran as part of relay teams in the event before and has done a Marathon, it was her first ultra.

"I normally don't run more than 15, 20 miles but I loved it," she said. "The support was so amazing. I had a dedicated support person which made it just absolutely fantastic. Everyone was cheering and it was so much fun."

Stoby said his team Three The Hard Way knew they couldn't do it individually but wanted to support the event and came together and were surprised to break the 5:03.24 course record.

"I know we had a strong team but hills are not so much our forte," he said. "When you think about the course, it's more than hard. It's an understatement."