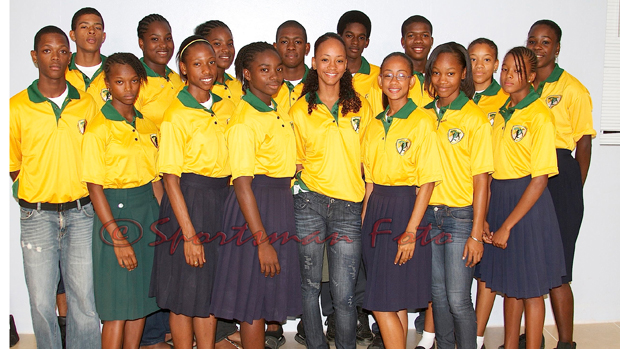 11 Girls and five Boys will compete in the 41st Carifta Games in Bermuda, marking the BVI's largest delegation to the games in its history.

MARCH 24—Some 16 athletes—the biggest delegation ever since the inaugural venture in 1976—will represent the BVI at the 41st Carifta Games in Hamilton, Bermuda, April 6-9.

The delegation was presented on Friday afternoon at the Dept. of Youth Affairs and Sports, during a media briefing, that also included remarks by Dr. Marcia Potter, Ag. Permanent Secretary in the Ministry of Education & Culture, on behalf of Hon. Myron Walwyn and BVI Olympic Committee president Ephraim Penn.

The team includes nine athletes who have had previous Carifta Games experiences and the bulk of athletes are in the Under 17 Division where there are nine athletes—8 of them girls.

BVI Athletics Association officials said this is the strongest U17 Girls team that has ever assembled, because it’s not just a team of sprinters, but include hurdlers, throwers and mid distance performers as well.