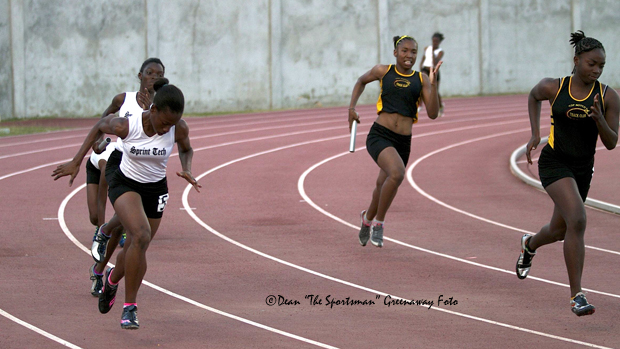 FEBRUARY 14—The fourth Gatorade Development Series meet at 5:30 p.m. on Friday, Feb 22—the Johnny Hassan Relays in honor of the former BVI Athletics Association President—is shaping up to be more than just a battle between clubs, schools and St. Thomas teams.

Fire and Rescue and Police have so far accepted the 4 x 100m challenge among public service organizations as well as representatives from nine Sporting Associations—Football, Basketball, Cycling, Tennis, Squash, Rugby, Softball, Volleyball and Track and Field—have indicated they too will run in a sprint relay challenge. Civic groups have also been invited to participate.

While there’s no 4x400m on this year’s program which was dominated by Sprint Tech Track Club last year when they threatened the National Youth Record, they’ll be trying to avenge a 4x100m relay loss to the Top Notch Track Club quartet.

Meet namesake Johnny Hassan has offered $250 to each outstanding club/school male and female relay team on the night.

There will also be the 100m for U17 and Open Divisions and the 400m for U17 male and female, as well as the Javelin Throw and Shot Put events.

Online registration for the competition is in progress through Monday, February 18.

Events on the program are as follows:

The fifth and final race of the Gatorade Development Series will be in honor of BVI Athletics Association founding member and longest serving president Rey O’Neal. This competition is scheduled for 5:30 p.m. on March 1. Online registration will begin on Tuesday, Feb 19 and closes on Monday, Feb 25.

The National Jr. Championships, which also serves as the Carifta Games trials are scheduled for March 8-9. The semifinals will begin at 5:30 p.m. on March 8 and includes the 100m semis and finals in both U17 and U20 divisions. The 400m semis as well as the Javelin Throw, High Jump and Triple Jumps, 1500m finals and the first two events of the Pentathlon will also be contested.

Competition on March 9 will begin at 9:45 a.m. A technical meeting will be held at 6 p.m. on Wednesday, March 6, at the Multipurpose Sports Complex.