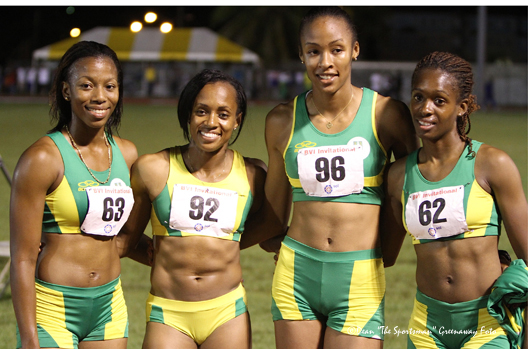 APRIL 7—With the 2013 outdoor track and field season in full swing, the top BVI female athletes have begun making their marks as they seek to qualify for the 14th IAAF World Championships in Moscow, Russia, later this summer.

In Florida, Tahesia Harrigan-Scott and Chantel Malone—seeing action in the Florida State Relays—competed in the sprints and jumps respectively. Harrigan-Scott ran 23.50 in the 200m to finish second in her heat. In her last outing, she had a wind aided 23.41 time.

In her first century this season, Harrigan-Scott was .02 off matching last year’s season’s best when she ran 11.61 seconds to place sixth.

Malone—who competed at the 86th Clyde Littlefied Texas Relays last weekend where she was tied for fourth with a leap of 6.43m (21’1¼”)—won the Invitational Long Jump at the FSU Relays on Saturday, cutting the sand at 6.15m (20’2¼”).

Meanwhile, at the Duke Invitational, Morgan State Bears Sr. Britney Wattley turned in a 200m season’s best of 24.53 seconds to finish sixth. She was coming off running 12.03 in the 100m in the Raleigh Relays last weekend. She led off  the victorious 4x100 that ran 45.27 seconds.

Further north, working on her speed, Portland State Vikings Sr. Dominique Maloney was second in the Willamette Invitation 100m with a personal best of 12.01 seconds. She followed up by winning the 200m in a meet record 24.63 seconds.