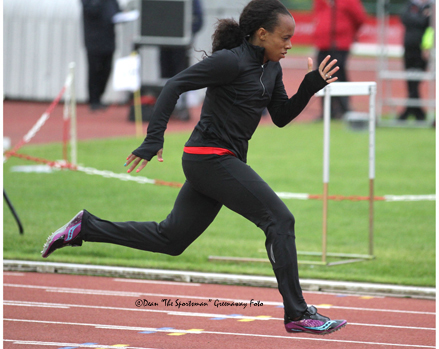 Tahesia Harrigan-Scott will be competing in her fourth IAAF World Championships with appearances in 2005, 2007 & 2009

APRIL 21—For the fourth time in her career, British Virgin Islands sprinter Tahesia Harrigan-Scott has qualified for the IAAF World Championships in the 100m dash.

Malone, competing at the Texas Longhorns Invitational on Saturday, won her 200m heat in a wind aided 23.78, +3.0 mps to finish sixth overall.

She ran third leg on the 4x400m Relay that also included St. Thomas’ Sianna Wynter on anchor, with the team placing third in 3:48.00.

Elsewhere, American Heritage High School Sr. Khari Herbert was second in the 400m of the Florida 2A Region 4 competition on Friday night in 47.86 seconds, .06 off his best recorded during the Carifta Games earlier this month.

His Carifta teammate Tahj Malone scaled the High Jump bar with a personal best of 1.87m (6’2”) to place second in the Florida Class 1A Region 2 championships in Orlando. Malone is a Sophomore at Montverde.