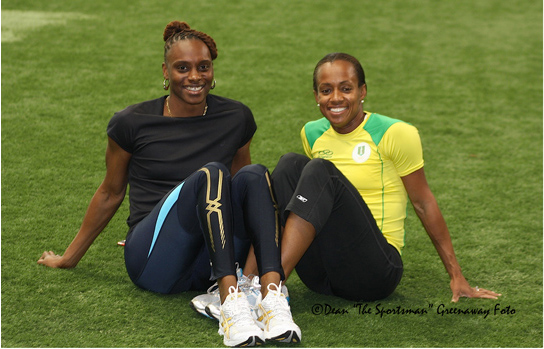 MAY 1—The U.S. and British Virgin Islands’ top female sprinters Laverne Jones-Ferrette and Tahesia Harrigan-Scott are good friends, mothers of a daughter and a son and also 100m rivals.

For the last decade, they have proudly carried their respective territory’s flags. They have met on several occasions over 100m but never in the Virgin Islands.

That is about to change.

For Jones-Ferrette who attended St. Croix’s Educational Complex before attending Barton County Community College and graduating from Oklahoma, she has never raced in the Virgin Islands as a collegian or as a pro. Harrigan-Scott who joined the professional ranks in 2006, last ran on home soil in 2010 during the what would be the last BVI Invitational.

Their historic 100m showdown—dubbed ‘Battle of the Virgin Islands top females 100m sprinters’—will have both athletes who have run 11.07 and 11.13 respectively matching up for the first time since the 2010 IAAF World Indoor Championships 60m final in Doha.

The BVI Twilight Invitational—which features professional athletes—replaces the BVI Invitational that has been held between 1970-2010.

“We are delighted to present The BVI Twilight Invitational, a high level competition featuring an excellent mix of professional athletes from throughout the region,” BVI Twilight Association Chairman stated. “The interest in this meet has been phenomenal and it shows that we have made the right decision in bringing high level athletes to our shores and becoming the newest host of professional competition in the Caribbean.”

On the flip side of the women’s 100m St. Kitts and Nevis’ 2003 IAAF World Champion Kim Collins will be returning to compete in the British Virgin Islands for the first time in 19 years.

With the level of competitors, every All Comers Track record is expected to fall, including that of reigning 400m Olympic Kirani James, when he ran 46.85 as a 16 year old in 2008.

“We have several 45 seconds quarter milers in the lineup and have also attracted several athletes who have run under 10.20 in the 100m,” Augustine noted. “Track and field fans from through out the Virgin Islands and beyond will be treated to a good show.”