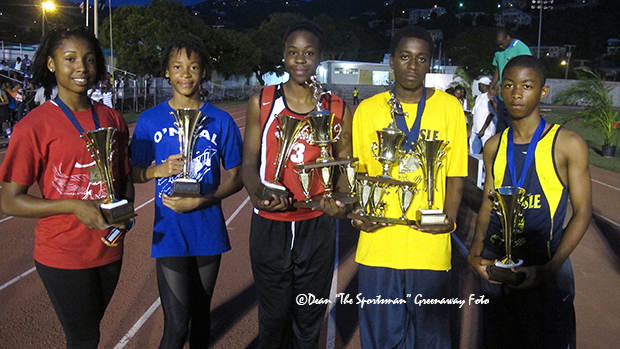 At the end of the competition, Flemming, House 3, landed their record 15th Inter-House Championship since their first in 1981, dethroning defending champs Carlisle—who ended a 22-year drought last year. Flemming amassed 687 points. It came down to the Sr. Boys 4x400m Relay to decide the final placing among the other three houses. O’Neal, House 2’s anchor held off his Carlisle, House 4 counterpart as both ended tied for second with 558 points. Lettsome, House 1 finished with 531.

Huggins’ marks paced 15 meet records established during the 2-day competition which started on Wednesday experienced a day’s rain delay for the first time in its history and ended on Friday.

Lettsome House’s Kyron McMaster picked up his third meet record of the competition when he ran a personal best of 22.41 seconds in the 200m, after recording Intermediate Division marks of 11.25 and 50.49 in the 100 and 200m on Wednesday.

“I’m pleased with their overall performance. They were very competitive,” she noted. “I must single out a few of them. Leshawn Lindo for the boys and Zacharia Frett for the girls In the Jr. Division,. The Intermediated—I cannot mention a single name. all the Intermediate athletes—both boys and girls were very, very good and they broke records also.”

Sammy said her senior girls were outstanding in their own way. She said she was happy for Dominic Adams who went out on a good note as division champion. She said that she was happy for Niaylia Smith, because over the years, she knew Niaylia could have been a Victrix Ludorum. “But, because of other circumstances she never made it, however this year she made it because she took it upon herself and she did it.”

Sammy thanked the public and parents for coming out and supporting their children. She also thanked the coaches. She said they told her that she always have a team on the track training.

“Sports does not begin on Sports Day. Sports starts at the end of Sports Day,” she noted. “We look at our athletes, identify our weaknesses and we work on them for the next year. I think we are going to hold the title for many, many years if we stick like that. Bianca Dougan is back and she has joined the House 3 team so there’s no backing down now.”