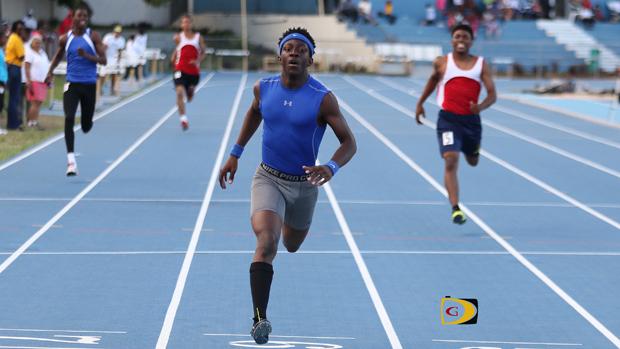 O'Neal House's Rikkoi Brathwaite completes the 17 & Under Boys sprint double in 22.37 seconds after joining a short list of school boys dipping under 11.00 with is 10.92 time. PHOTO: Dean "The Sportsman" Greenaway

Sitting on a splinter lead of just two points-the narrowest margin going into the annual Elmore Stoutt High School inter-house sports day after pre competition events-defending champions Lettsome House made a surge that resulted in a 68.5 points end of Day I lead over Flemming House, who was breathing down their neck.

Lettsome with strong showing in the sprints High Jumps and Shot Put, took their slim 327-325 points advantage over Flemming to end Day I on 590 to Flemming's 521.5, en route to a 3-peat championship their eighth overall.

At the end of Friday's second day, Lettsome had amassed 832 points. Flemming hanged on for second as they were three points better than Carlisle, 709-706. O'Neal rounded out the scoring with 645.

"The two points lead was an achievement for us because basically, last year we came into sports day in last place and we did it," assistant House Master Nahassie Chalwell, pointed out. "This year, coming in with a two points lead we were a little more confident because we already knew that in certain races, we were going to do very well with the athletes we already have. So, it was a motivation to be in the lead and we know we had to maintain the lead and just wrap up the title."

By taking control after all the 100m races, Chalwell said they didn't realize the type of athletes they had until they saw them in action. "We were to have run off but only heard about these athletes and had never seen them. After seeing them in these races, we know we have something special going on," he said.

Among the meets highlights was O'Neal House's Rikkoi Brathwaite winning the 17 and under Boys 100m in 10.92 seconds joining a short list of school boys to accomplish the feat. He pulled off the sprint double by winning the 200m in 22.37 seconds.

Teammate L'T'Sha Fahie ran the 20 and Under Girls equivalent in a personal best of 11.80 seconds, shaving her best from 11.85. Her time also met the IAAF World Jr. Championships qualifying standard.

Lettsome's athletes won three of the eight division titles at stake including a sweep of the three top places in the 15 and Under Boys Class. They also had five second place class finishes.

Carlisle Houses' Xiomara "Gia" Malone, was the Girls 13 and Under Division champion with 48 points and Lettsome House's Antwon Robison took the Boys crown with 40.

Flemming's Zara Brown was two points better than teammate Shauliqua Fahie, 40-38, in the 15 and Under Girls Division. Lettsome's Tyrique Bradshaw and J'Quaan Bodkin led a sweep of the Boy's side with 38.

Teammate Arianna Hayde toped the 17 and Under Girls Class with 50 points.  Carlisle's Jelani Norman sealed the boy's segment with 38.

Flemming's Sha'Kida Lavacia topped the U20 Girls with 48 while Carlisle's Akeem Bradshaw and Lettsome's Adriano Gumbs shared the boys segment with 40.

Lettsome's Arianna Hayde was the Victrix Ludorum with 50 points. There was a three way tie for the Victor, between, Carlisle's Akeem Bradshaw and Lettsome's duo of Adriano Gumbs and Antwon Robinson, with 40.