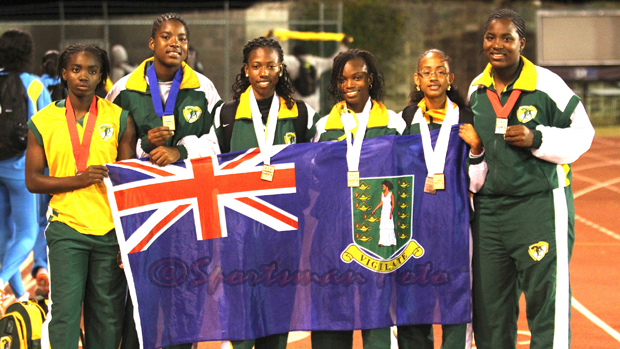 DEVONSHIRE, BERMUDA, APRIL 11—Despite an Under 17 Girls 200m bronze medal slipped away when Nelda Huggins stepped on the line and was subsequently disqualified, the BVI wrapped up its most successful mission ever at the premier regional Jr. Track and Field Championships.

At Monday night’s conclusion of the 41st LIME Carifta Games in Devonshire, Bermuda—where Team BVI narrowly missed another bronze medal in the U17 Girls 4x400m relay—the team walked away with a record five medals, surpassing the three that were bagged in 2006 and 2007 respectively. The BVI has won 25 medals in the event since 1978.

Huggins—who had already bagged 100m silver and anchored the 4x100m relay to a historic first bronze—ran 24.63 seconds to secure her place in the U17 Girls 200m final, in which she drew lane eight. Seeking to join Chantel Malone’s 2007 feat of three medals in one Carifta Games, she powered from the blocks to finish third in 24.56 seconds but was disqualified for stepping on the line on the curve. A protest was lodged on her behalf, but the video evidence was irrefutable.

Before Monday’s finale, the BVI notched three medals on Sunday. After leading the competition, Trevia Gumbs earned silver in the U17 Girls 1.0kg Shot Put, when she tossed the ball 13.47m.

Later in the day, running in her second Carifta Games final, 2014 Youth Olympic Games hopeful Lakeisha “Mimi” Warner, snatched an U17 Girls 800m bronze, after she challenged two Jamaicans and finished .11 seconds from the top of the pile when she ran 2 minutes, 18.32 seconds.

Some 90 minutes later, she had a second leg carry on the U17 Girls 4 x 100m Relay. She received the baton from Jonel Lacey, then passed off to Taylor Hill who gave the stick to Huggins as the team ran 48.22 seconds for the territory’s first spot on the podium in that event.

The BVI kicked off the championships on Saturday when debutant Tynelle Gumbs opened the U17 Girls 600g Javelin Throw, by sending an early message to her opponents of her intentions with a heave of 35.48m. Two throws later, she heaved the spear over 38.32m to eclipse her 36.74 personal best established during the Elmore Stoutt High School Inter-house Athletics Championships.

When Trinidad and Tobago’s Akidah Briggs got in range with her 37.64m heave, Gumbs responded with a throw that sent the BVI delegation into a wild celebration after the implement cut through the chilly Bermudan air and landed, then the leader board showed 41.46m for her gold.

Gumbs’ mark is also a National Youth, National Jr. and National Scholastic Record, for which she will collect a Sol National Record breakers award during the 4th BVI Athletics Association December 28, Athletes Awards Recognition  Gala. An athlete establishing an indoor or outdoor National Record that stands at season’s end qualifies for the award.

Later in the competition, Gumbs, had a personal best toss of 30.66m in the 1.0kg Discus Throw, to finish sixth.

Also on opening day, Tarika “Tinker Bell” Mose advanced to the 400m final. The 14 year old took out the race and shaved .02 seconds off her personal best, to place second behind the Bahamas’ Juannae Lewis, who ran 55.30 to her 55.62—tied with Guadeloupe’s Sareena Carti for the third best time in the competition.

Unfortunately, a hamstring strain prevented Moses from competing in the final, and making other valuable contributions to the 4x100m and 4x400m relays. Moses who debuted in the Carifta Games last year, advanced to her second straight 400m final.

Huggins—a 2014 Youth Olympic Games hopeful—advanced to the U17 Girls 100m final to join Hill who had earlier run a wind aided (3.7mps) 12.11 seconds to secure an automatic berth with a second place finish, when she ran 11.89 with a 5.1mps tailwind.

In the final—where the BVI had two entrants for the first time—Huggins’ charge towards gold was denied by Jamaica’s Shauna Helps who rode the 4.6mps wind chilled breeze to 11.66 seconds with Huggins taking second in 11.76 and the other Jamaican, Monique Spencer snatching the silver in 11.90. Hill completed the historic final for the territory in fifth, after stopping the clock at 12.10.

The territory’s quest for a third medal on Saturday was earlier denied, when Tarika “Tinker Bell” Moses was unable to occupy lane 4 in the U17 Girls 400m final, because of a hamstring strain.

In the U17 Girls 300m Hurdles where the BVI had two first time finalists—Jonel Lacey—in her first year hurdling—was on course to snatch a medal when she hit the last barrier that slowed her progress and she placed fifth in 45.97 seconds. Erickson followed in 49.10.

Aundre Turnbull equaled his U17 Boys High Jump best, when he cleared the bar at 1.75m and placed tenth. He had a leap of 5.72m in the Long Jump for 11th place.

Brandon Andrew walked away from the competition with two National Jr. and National Scholastic Records. In the middle of his Heptathlon Debut—where he had already run 15.93 seconds over the 110m Hurdles—he entered the U20 Boys open event and lowered his day old best to 15.60 seconds.

Andrew was eight in the Heptathlon. He was fourth overall in the 110m Hurdles, clearing the barriers in 15.93 seconds to earn 741 points. He finished in a three way tie for fourth in the Long Jump, after cutting the sand at 6.24m to earn 639 points. The 17 year old notched 444 points on the Javelin Throw, after the spear landed at 40.13m, to finish sixth. Andrew ended day one by finishing seventh overall in the 200m after finishing in 23.53 seconds to garner 736 points for his fifth place overall tally of 2560 points.

Shaian Vandenburg missed making the Under 20 Girls 200m final by one position, after running a personal best 25.69 seconds in her heat. Earlier in the competition, she was seventh in the 100m final, following a windy 12.30 mark.

Shaqouy Stephens, running in heat four was sixth in 22.87 seconds but didn’t advance. He was fourth in his 400m heat in 53.21 seconds, while Tarique Moses was sixth in heat three in 53.88.

Tarikah Warner, competing in the Under 20 Girls Long Jump, paced sixth with a leap of 5:02m.