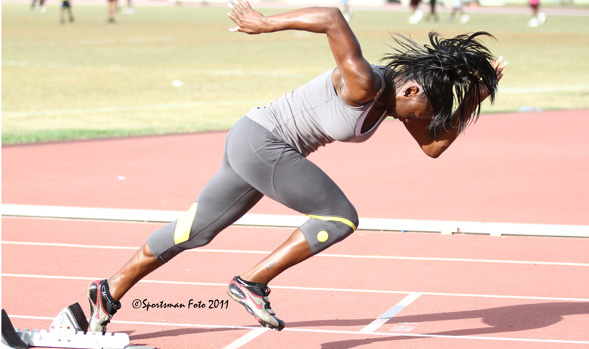 JANUARY 21—Portland State Vikings Sr. Dominique Maloney has one of her indoor season’s goals out of the way and ex Viking Karene King has a new 60m best.

On Friday night at the Cherry and Silver Invitational in Albuquerque, New Mexico, Maloney took down Femi Kehinde’s 400m school record that had been on the books since 2006, when she ran a personal best of 55.72 seconds. At last year’s competition, she turned in a time of 56.90. Her mark is also the leading time in the Big Sky Conference.

Also at the Cherry and Silver Invitational, former Portland State Standout Karene King—in one of her few indoor competitions this season—ran a personal best of 7.46 seconds in the 60m dash to place second behind her former teammate Geronne Black, who won in 7.36. In the prelims King lowered her best from last year’s 7.49 to 7.47. She then went on to win the 200m with her fastest opener ever of 24.02 seconds.

Quarter miler Ashley Kelly—in her first post collegiate race—ran 7.64 seconds in the 60m dash at the Illinois Illini Indoor Classic on Saturday, to open her 2013 season.

In what he described as “terrible conditions” Bethune Cookman Jr. Keron Stoute won the High Jump in his 2013 Indoor season debut at the Florida Gators Invitational in Gainesville, Florida. Stoute cleared the bar at 2.03m (6’8”).

Morgan State Bears Sr. Britney Wattley had a very busy weekend of competition. On Friday, she ran the 60 and 200m at the Great Dane Classic in New York, then competed in the same events on Saturday at the Terrapin Invitational in Maryland. She ran 7.79 in the 60m prelims and 7.74 in the final at the Great Dane Classic and 25.40 in the 200m. At the Terrapin’s Invitational, she recorded marks of 7.90 to win her heat and 7.88 for fifth in the final respectively in the 60m and 26.11 in the 200m.